In addition to his leadership role as CEO with Extraordinary People, Robert White is a Mentor to Executives, author, frequent keynote speaker and workshop leader on organizational and team leadership, handling rapid change, entrepreneurial success and being more personally effective.

Robert’s training industry experience began with being President of pioneer personal growth seminar company Mind Dynamics Inc. He was founder and President of Lifespring, Inc. which he sold to his staff before moving to Japan.  There he founded and served as Chairman of ARC International for 22 years and worked closely with its corporate and individual clients throughout Asia, South America, Europe and North America.  Lifespring and ARC International, graduated over one million participants from high-impact experiential seminars and served over 1000 corporations.

He has served as a vice president of the Instructional Systems Association, and as Asian Regional Vice Chairman of the Pacific Basin Economic Council.  As a member of the American Chamber of Commerce in Japan, he served as chairman of several committees and as a member of the Board of Governors.  Robert was elected a Fellow of The World Business Academy; The World Scout Foundation has honored Robert as a Baden Powell Fellow; he is co‑author of the award-winning photo essay book, One World, One People; and author of best seller Living an Extraordinary Life (English and Chinese editions).  Nightingale Conant also published an audio home-study adaptation of Robert’s core seminar work Achieving Extraordinary Success which won AudioFile Magazine’s Earphones Award for “Best Spoken Word Personal Development Program.”

Living out his commitment to contribute toward a world that works for all people, Robert actively supports the Sarvodaya community development organization in Sri Lanka, The Kempe Center for Child Abuse and Neglect and The Adoption Exchange.  He also serves on the Board of Directors of Plant-It 2020 and previously served on the Boards of the Desmond Tutu Peace Foundation and the Windstar Foundation.  Robert founded One World, One People Foundations in the USA, Japan and Hong Kong – non-profit organizations that have donated over one million U.S. dollars to charities doing environmental education and those working to end child abuse and neglect.

Helping others to develop extraordinary personal leadership abilities, capacity and effectiveness is Robert’s personal mission.  His other interests include current events, studying history and philosophy, being with his eight children and enjoying many styles of live music. 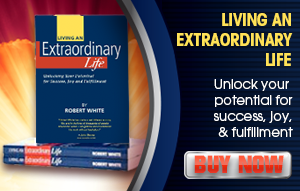 Extraordinary People Success Tip: Pay Attention to Time
The price of anything is the amount of life you exchange for it. -Henry David Thoreau Time is at once the most valuable and the most perishable of...
Read More